The history of Freecell: a solitaire game made for computer implementation

I'm currently adding some on-line documentation for my recently released Solitaire Whizz compendium for iPad. Solitaire games (or Patience games, as they are still commonly referred to in the UK) have borrowed ideas from one another over the years and different games have become popular with the publication of particular different magazine and book articles describing them. Solitaire games lend themselves well to computer implementation, and indeed to a device such as the iPad, as they are based on relatively simple principles and are fun to play, but are sometimes tedious to set up. But compared to a computer screen, playing on the iPad gets you a little closer to the feel of manipulating real cards on a flat surface. (As I have argued before, the same is true of board games in general.)

Freecell essentially started life as a game for the PLATO computer, a mainframe system developed for education in the US in the 1970s. The original PLATO version was developed by medical student Paul Alfille and was apparently popular among US university students at the time. In an interview, Alfille discusses how Freecell was loosely based on recollections of other solitaire games he had read about as a child, but not formally based on any prior description of an identical game, and originally played as a card game only by himself. So essentially, the incarnation of Freecell was as a computer game.

Various games that were popular in the 1980s, such as Elite, Battle Zone and simple RPGs, appear to have had their origins in games developed for PLATO in the 1970s (the original 1970s games appear to have been slightly more educationally oriented with less of an arcade style to their gameplay: see this video for examples of some games in action). It is probably not too surprising that games played by computing students of the 1970s had spin-offs in commercial games in the 1980s as the respective programmers developed their careers. And so, Freecell as it appeared in Windows appears to have been a spin-off of the PLATO version of Freecell-- even though the Microsoft developers had no connection as such with Paul Alfille.

The original PLATO version of Freecell appears to have been highly configurable, with varying numbers of columns and cells. Following its Windows incarnation, modern versions of Freecell tend to be played, as with the version included in Solitaire Whizz, with eight columns and four cells. But Alfille describes another popular variant at the time, with four columns and ten cells, which was frequently winnable. Another feature of the original version appears to have been that it made moves automatically: specifically, when there was only one possible 'useful' move at a given time, the computer would make it automatically.

In the Solitaire Whizz version, moves are not made automatically. However, when you press the 'Hint' button (or turn on automatic hints), only 'useful' moves are presented to you. If there is sufficient interest, I may add an option to make moves automatically in a future update to the app.
Posted by Neil Coffey at 11:36 AM 1 comment: 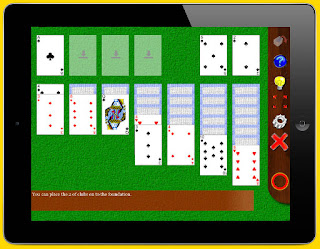 You may be aware that, as well as writing articles about programming, I also get to do some programming from time to time :)

And so, I am pleased to announce that the first version of my new app, Solitaire Whizz for iPad, was released to the App Store the other day!

Solitaire Whizz currently features a total of 16 solitaire (patience) card games and variations. It includes classics such as Klondike and Freecell, along with various other games chosen because they are fun to play and lend themselves to the iPad format. So, for example, if you are looking for Pyramid 13 or Yukon for iPad, do check out the app.

Posted by Neil Coffey at 9:51 PM No comments: